Meet video is at the bottom of the blog.

I decided about 9 months ago to go to Las Vegas and compete in this meet. I competed in single ply, like there was any other option for me. Single ply till I die.

Training was about 75% of what I expected leading up to the meet. One would think that with a powerlifting gym in our own warehouse and with all the bars, accessories and training goodies at my fingertips that it would be easy keeping on track with my training. Well that is not the case. Lifting Large keeps me very busy and it is hard to shut it off in my head and focus on training. I was also the only one from our gym going to compete in Las Vegas and I am extremely training partner motivated when it comes to meet prep and focus while training.  Since I hit my fifties, I also find recovery and training volume still a mystery to tackle. When you are younger you can just keep hammering away and still get stronger. When you get older you may have 2 good training weeks in a row and then a very poor week due to body stress or old injuries flaring up. I am horrible at self-regulating my training and progress. More of this later though.

I started using the Titan Velocity sumo deadlift suit 4 weeks out from the meet with the straps down. This would give me 2 training sessions with straps down and 2 with straps up with last session being the opener 14 days away from the meet. I generally would not recommend this little time in the suit for anyone that is fairly new to equipped powerlifting. The suit is a tool and you must learn to use it, it is not magic as some unequipped lifters think. The first 2 sessions in the suit went well. The second session I did a 545x3 and that was it. I used to do more top sets in the suit, but my recovery just takes too long these days. The first week with straps up I decided to try a tighter suit. I did get it on, but I could not get my hips set correctly to start the pull as it was just to tight or I just couldn’t handle the pressure, maybe a little of both. I switched to a tapered Longhorn lever belt to see if it would help. The belt is 4 inches wide in the back and 2.5 inches wide in the front. It did help a bit, but the tighter suit was just too much. I switched back to the original black suit, it is just a tweaked size 48. I then completed a 565x2 pull but was toast after it because of screwing around with the tighter suit for about 30 mins. Thirteen days out I pulled my projected opener for a single at 565. It was hard an ugly. I am not sure why as it could have been a bunch of different things but probably my head was just not in it 110%.

Prep was done it was time to rest with only 1 light workout 7 days out with only some singles with 315 just for form check and blood flow. Well it did not happen. 7 days before I compete, I was sick and home in bed. 102 fever, chills and feeling really crappy. Teale my wife and Ronald my Media Manager ran Lifting Large while I stayed in bed for 2 days. By the time I got on the plane 3 days before I stepped on the platform, I was 8 pounds lighter and still very congested.

Lifting Large was the title sponsor at 2019 USPA Drug Tested Nationals so we had a booth set up for 4 days and it was Ronald and myself running the booth. Teale stayed at the warehouse and ran operations. The meet started on Thursday and my flight was on Sunday. By weigh-ins time on Saturday I had lost another 2 pounds but felt a bit better. I stuck with my original opener because I knew I could do it even feeling crappy. I always pick an opener with the mindset that I can do it even on a my worst.  My 2nd attempt was a guess at that time and my 3rd wasn’t even on the horizon. I knew 565 would set an IPL Master 55+ world record as there was not one established and the minimum to set one was only 535.

Competition day had arrived. Am I ready? Well it does not matter at that point does it? Warmups were as limited as possible to conserve energy. My pre-stretching last about 1-2 minutes

That’s it. My shortest warm up ever.

In the warmup area I have my media Manager Ronald following me around a camera taking video for a meet video we will posting soon. I volunteered Clay Edgin to handle me and he agreed as I have a lot of dirt on him. He was competing later in the day, so I figured it was a warm up for him (Thanks Clay).  Now I am about 6-foot-tall and when someone puts the straps up on my suit they usually stand on a bench and they are pretty hard to put on but not for Clay. He is 6’ 4” if not more. He grabbed my first strap lifted me off the ground and shook me like a doll until I dropped into the suit. It was hilarious. Very efficient and no energy expended by me since my feet weren’t on the floor.

The Bar Is Loaded:
Opener
255kg and the bar is loaded. I walked out on the platform, set up, cranked in my grip, pulled, locked it out and it was over. Easy pull and I was surprised.

2nd attempt
270kg. Same as first attempt, no problem., Lock out feel soft on the knees but upon reviewing the video it was fine.

3rd attempt
282.5KG. I picked this because I missed it about a year earlier. It was a little slower in the middle of the pull, but it was not as heavy as I thought it would be. 3 white lights.

My suit was much looser than the previous training sessions because of the 10-pound bodyweight loss. It still did the job though and I probably could have handled the tighter suit, but I never completed a rep in it and the meet was not time for experimenting.

I was very happy with all 3 lifts especially going in being so light and being sick. As a friend texted me the day before I competed “Usually when you feel so-so going into the meet you do the best” It is true as I know from 32 years of competition.

I want to thank Steve Dension the judges, loaders, spotters and the support staff at USPA for another well-run meet. The USPA will never let you down with meet quality and professionalism.

Ronald my media manager will be doing a USPA push pull meet in October and I think I might do it with him and pull RAW. I know it is like joining the masses and leaving the dark side but maybe it will show some unequipped lifters you can do single ply and raw and still be a powerlifter. 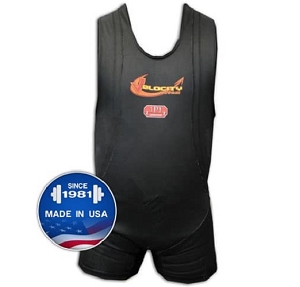